The Adventures of Ronnie & Dr. Sheba

Ronnie and Sheba met in the Summer of 2007 at a Kappa Alpha Psi Fraternity, Inc. event in New Jersey.  They were introduced by a mutual friend, and began dating soon after. They both loved to travel. From a young age, Ronnie loved traveling to new places. His father was in the military, which allowed his family to visit and live in various places, including Germany, Texas and Washington State. Sheba’s first time traveling abroad was during undergrad, where she visited the United Kingdom, the Netherlands and Switzerland learning about their different healthcare systems. This combined her passion of travel and health, and she knew she wanted to build a life, and career, focusing on these two industries.

Within their first year together, they traveled to Canada, Miami, South Carolina, Key West and the Bahamas. This was only the beginning. Road To 100 Countries started as a personal travel goal for Ronnie and Sheba. They had traveled quite a bit over the next 6 years, but realized they were visiting the same countries mainly around the Caribbean (Bahamas, Aruba, St. Maarten, Mexico, St. Thomas, etc.). This is fine, if you love a certain destination, but they had another goal in mind. A goal to travel the world, experience new places and cultures and learn about the history of different places. With this in mind, they decided to stop repeating countries, and only visit new destinations. With 195 countries recognized by the UN, they decided they wanted to, at first, visit half of the world. Right there, Ronnie said, “we should visit 100 countries.” And Sheba agreed. At that point, in 2013, they had only visited about 13 countries together. As the years passed and they began to fill up their passports, they received a lot of questions about their journey. How do you pay for your travels? Do you work full time? Are you starting a blog? How do you decide where to go? Where are you going to next? Most people wanted to know how they funded their travels.

Throughout the years, Ronnie and Sheba learned about earning hotel points and airline miles, and then created a system of their own to significantly reduce the cost of their travels. There are so many loop holes and ways one can travel at a fraction of the cost, if a person just changes their travel mindset. Even when it comes to taking days off from work, one has to think outside the box when taking vacation days if the goal is to travel more. The Tricks To Travel System ® allowed them to travel for a fraction of the cost. Ronnie and Sheba have not paid for a hotel/ resort in the past three years, and have paid only about 40% of their flights using their Tricks to Travel system. The years flew by, Ronnie and Sheba got engaged, married in Bermuda, moved to Maryland, bought a house and started new jobs, worked 40+ hours a week. By September 2018, they visited their 100th country, Mauritius. But the journey continues! They started Road To 100 Countries ® to not just document their journey, but to show and teach others how they did it, so you can do it too!  Together, we can see the world! Each one, teach one.

Dr. Sheba was born and raised in New York City and attended Syracuse University as a Biology major. She was always interested in the health field and had a passion for helping others achieve their goals. Her first time traveling abroad was during undergrad, where she visited the United Kingdom, the Netherlands and Switzerland learning about their different healthcare systems. This combined her passion of travel and health, and she knew she wanted to build a life, and career, focusing on these two industries.

She continued her education at Drexel University to earning her Master’s in Public Health degree, and then on Columbia University where she earned her Doctorate in Health Education. She has over a decade of experience in public health and health education. Over the years, she has worked in public health research, project management, program planning and as a health educator with Mount Sinai School of Medicine, NYU School of Medicine, Drexel University, Columbia University, US Army Public Health Command and currently with the Centers for Disease Control and Prevention (CDC) as a Research Scientist and Grand Canyon University as an Adjunct Professor.

Dr. Sheba is also a Certified Health Education Specialist and Health and Fitness Coach. She assists individuals and groups to improve their health and well-being by incorporating simple fitness and nutrition strategies into their everyday lives. She is specifically passionate about enhancing the health and well-being of women and families.

Dr. Sheba is passionate about her family and friends. She loves to travel and has visited 100 countries over the past eight years with her husband, Ronnie Dunston. She loves to learn about other cultures, meet new people and see new places. Above all else, she loves to teach people about health, fitness, travel, and loves to help others accomplish their goals.

Welcome to the world little one! 💖 After much a

We started the holiday season in #Dubai 🇦🇪 a

Merry Christmas from my family to yours. 🎄 It

Father. This is hard. I have no words. You lived f

Thank you #Dubai for feeding us well 😂 One of

A trip to Dubai 🇦🇪 is not complete without v

“Have you made people? I’ve made my own people 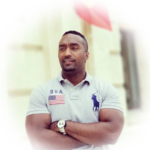 Ronnie Dunston was born in Passaic New Jersey. His father was in the military, which allowed his family to visit and live in various places, including Germany, Texas and Washington State. From a young age, Ronnie loved traveling to new places.

Ronnie attended Seton Hall University and majored in Psychology with a minor in Business. From there, he earned a master’s of Psychological Counseling from Monmouth University, along with three additional Master degrees, an MBA, MPA and MHRM from Keller Graduate School of Management. Ronnie served as a Dean of Housing and Student Services for many years, taught in the School of Business and is currently a Senior Training Specialist with the Department of Energy. He realized he has a passion and talent for teaching and helping others pursue their academic and career goals.

Ronnie Dunston began his love for travel at a very young age and hasn’t stopped since. The more places he visited, the more of the world he wanted to unlock. This has sparked an enthusiasm to help others travel the world in abundance, too! In 2011, he founded his first travel company: Pay Cheap Rates Travel Club ®. This organization aimed to help travel enthusiasts interested in seeing more of the world, for a fraction of the cost and included a full concierge service to assist with vacation planning.

As Ronnie gained more experience in the travel industry, he learned new ways to travel the world “for cheap” using points and miles. After selling the business (Pay Cheap Rates Travel Club ®), he set a personal goal to see 100 countries, with his then fiancée, Dr. Sheba. Over the years, they learned the ins and outs of the travel industry. After reaching their goal of visiting 100 countries, Ronnie developed an education-based service – The Tricks to Travel system.  Instead of booking vacations for others, the aim of Tricks to Travel is to teach travelers how to find and book their own vacations through maximizing free flights and hotel stays.

With years of experience as a counselor, professor, trainer and business owner, Ronnie is passionate about creating a travel network and helping others accomplish their personal travel goals, for a fraction of the cost. The Tricks to Travel system, of which Ronnie personally developed, is only $19.99 and consists of three components: (1) Step-by-step, how-to videos detailing the fundamentals of how to maximize the points and miles system ($250+ value). (2) Access to his exclusive Tricks to Travel, members only group, offering 1-on-1 assistance to members, along with additional tips, tricks and resources consistently updated & shared ($99 value). Finally, (3) Access to his monthly Masterclass (Zoom), where featured travel topics are reviewed in detail, educating members on more ways to travel for free, as well as offering live question & answer with Ronnie himself. ($299 value).

Our last day in Disney with the birthday girl 😍

Which park is your favorite in Disneyworld? I don

On our way back from Iceland 🇮🇸 Nubia & Nala

For our last day in Iceland 🇮🇸 we explored t

Day 2: We ventured down to the South Coast of Icel

How many Black Sand beaches ⛱️ have you visite

How do you like to relieve stress? - Sometimes li